Twenty-five years ago I knew that Anna Cora Mowatt was obsessed with maintaining her reputation. A few months ago, I suddenly realized why.

Mowatt was a Victorian rarity – an actress and a “lady.” She was born into the upper-class of New York’s Knickerbockerocracy. Despite the fact that she made the unusual choice for someone of her class and gender to make her living as an actress/novelist/playwright, she argued forcefully in her autobiography that she should still be regarded with the respect normally accorded to someone of her social standing and that, by extension, all actors who stayed within the bounds of culturally sanctioned behavior should not be despised for their choice of profession. She made this argument so strongly that I had ample material to do an entire dissertation on the subject (which I eventually turned into a book, which you can purchase here:  The Lady Actress ).

What I did not grasp when I wrote my book was that Mowatt had composed her autobiography as she bounced back from her entanglement in a major scandal that had rocked the London financial and theatrical worlds of the mid-1840’s. Long before the people who thought up the title for Mary Pickford were born, Anna Cora Mowatt was an American Sweetheart. Young and pretty, she charmed audiences on both sides of the Atlantic. Even the notoriously blunt and jaded Edgar Allan Poe was a fan. On her London tour, she caught the eye of Walter Watts, manager of the Olympic and Maryleborne Theaters. He made her his special star, showered her publically with expensive gifts, signed her to an un-heard-of long-term contract, designed a whole season around her, commissioned the writing of new plays to feature her, and mounted no-expense spared productions of her original works. The champagne dinners he hosted in her lavishly furnished dressing room were the talk of London. It was like a dream come true.

On March 6, 1848, the dream turned into a nightmare. Walter Watts was arrested for embezzlement. It was revealed that he was a clerk for the Globe Insurance Company who was funding a double life as a theatre impresario by systematically falsifying accounts in his day-job. Little by little, he had stolen what in today’s money would amount to well over a million dollars.

A lot of people lost a great deal of money. Careers were stalled or de-railed. Many were angered that they had been so completely duped.

Although Mowatt was not part of the embezzlement scheme, she bore the brunt of some of the shock and outrage that spilled over from the revelation of Watts’ crime. In England, as much as fifty years later, descriptions of Mowatt’s fancy dressing room and the silver urn Watts presented her with were still being mentioned as bullet points in retellings of his misdeeds included in the annals of notable criminals of that century. Unsubstantiated rumors about the identity of the woman in the portrait in the locket Watts was wearing when he hung himself and the owner of a scarf he had with him are sometimes allowed to waft in Mowatt’s direction by some writers.

To be completely frank with you, as a young scholar, one of the things I found most attractive about Mowatt as a subject was that she was a very obscure persona in my field (Performance Studies). In the 1990’s, only a handful of articles had been written about her career as a Public Reader. That covered less than a year of her life. This left me very free to forge my own way as I wrote without having to devote substantial portions of my work to rehashing old arguments or getting cornered into taking stands on issues I didn’t care about. This is rare and wonderful freedom for a scholar. The downside, I discovered some twenty-five years later, was that none of my professors knew enough about this woman to say, “Hey, you’re ignoring a biographical detail that has a profound impact on every word you’re writing!”

To be fair, much of the point of Mowatt’s autobiography is to get the reader to ignore that incident. Her biographers weren’t a great deal of help in this area either. Barnes, Blessi, and Butler all give brief accounts sympathetic to Mowatt and short on details about Watts. Most encyclopedic-style profiles of Mowatt leave out the scandal altogether. I am personally responsible for a good deal of misinformation circling the globe at the moment. For years, I was under the mistaken impression that Watts was not the manager of a theater, but a theatrical agent who embezzled from Mowatt’s personal accounts. The biographical sketch I had posted of her on my website phrased it that way. If you see an account that states something to that effect, it has been copied and pasted from me. Consider it my watermark of error.

Now the time has come to correct that error. I am starting work on a new book, “Touch of Scandal: The Un-making of Anna Cora Mowatt” that will come to grips with the Walter Watts scandal and the impact it had on her life, career, and writing. I want to use this blog will be a clearinghouse for my research. I invite you to come with me over the next year or so as I sort through all the rumors, innuendo, charges, counter-charges, stories, lies, and evasions that make up this frequently confusing, dramatic, and sometimes tragic chapter in the life of an American original. 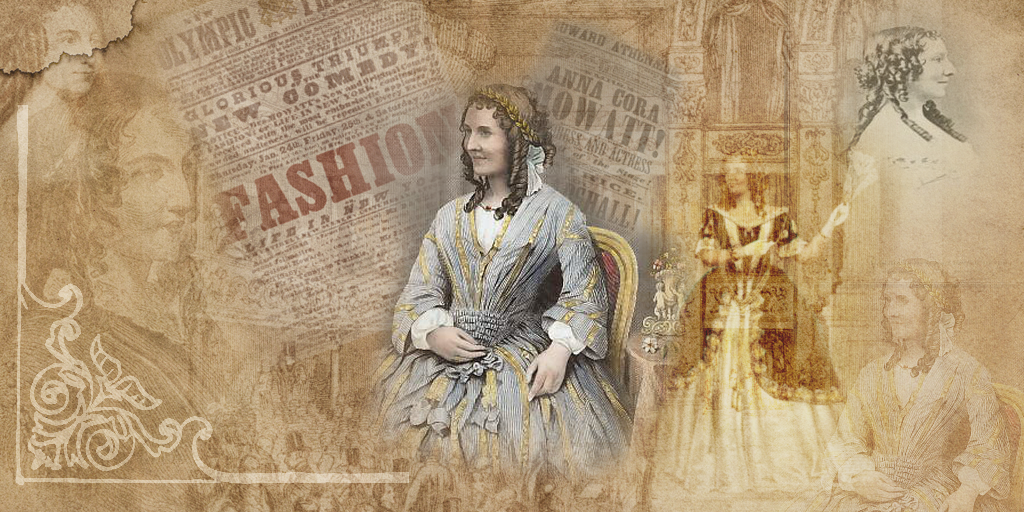