Scandal and rumor need to be fed with feelings of jealousy and malice. Take a moment to consider the many incidents you’ve heard recounted in the past six weeks in which a celebrity, politician, or even some unfortunate private individual has come to national attention for having done something foolish or scurrilous. Out of these many stories, which narratives proved to have staying power in the public’s imagination? Pity may have the power to move us, but watching the downfall of someone we dislike or envy fascinates us endlessly.

Who knows what inspired Walter Watts to buy the leases on the Marylebone and Olympic Theaters? He had been embezzling from the Globe Insurance Company for around a decade without being caught. The theaters weren’t money-makers. Attaching himself to the entertainment business inevitably put his name in the newspapers. The safer, more sensible bet by far would have been to continue to quietly lead his double life as nondescript insurance clerk by day and millionaire playboy by night.

It seems that Walter Watts got bored with playing it safe.

In the narrative account I referred to last week that purports to be written by a young male friend of Watts’, the author recounts an incident in which the manager is confronted by the reputation that he has acquired as lessee of the Olympic Theater: “Watts was greatly delighted when one evening, after conducting a visitor behind the scenes, a journalist remarked, “you are the Sardanapalus of theatrical administrators.” It was true in more senses than one.”1

Dear reader, if the name of Sardanapalus is not familiar to you, let me begin to unpack what’s being indicated here by telling you that this was the name of the title character in a play by Lord Byron. If you were a mid-century Victorian and one of your contemporaries – even jokingly — compared to a Byronian protagonist, this was a clear signal that you had strayed far afield from the white picket fences of conventional propriety.

“Sardanapalus” was a blank verse tragedy about the fictional last king of the Assyrians written in 1821 by Bryon. It inspired a painting by Delacroix, as well as musical compositions by Liszt, Ravel, and other Romantic era favorites. In the opening of the play, the king’s brother, Salemenes accuses the monarch of tyranny not through cruelty, but from an over-indulgence in slothful luxury:

Think’st thou there is no tyranny but that
Of blood and chains? The despotism of vice,
The weakness and the wickedness of luxury,
The negligence, the apathy, the evils
Of sensual sloth—produce ten thousand tyrants,
Whose delegated cruelty surpasses
The worst acts of one energetic master,
However harsh and hard in his own bearing.
The false and fond examples of thy lusts
Corrupt no less than they oppress, and sap
In the same moment all thy pageant power
And those who should sustain it; so that whether
A foreign foe invade, or civil broil
Distract within, both will alike prove fatal:
The first thy subjects have no heart to conquer;
The last they rather would assist than vanquish.2

Sardanapalus is unfaithful to his queen and makes a series of bad decisions that culminate in his committing a dramatic double suicide with his favorite concubine in the last moment of the play.
Delacroix’s painting “Death of Sardanapalus” (1828) has a similarly morbid twist. The painting draws on a legend recorded by Greek historian Diodorus that holds that the fictional king met his end by immolating himself, his eunuchs, concubines, and all his possessions in a great funeral pyre before the arrival of enemy troops. Delacroix’s work depicts the monarch reclining, awaiting his fate, bored and indifferent, amidst the chaos of the final moments as his followers destroy each other.

Not a flattering comparison for Mr. Watts, is it?

If you are of the “reading too much into this” school, pause for a moment. The metaphors we choose – even when we don’t put a lot of thought into it – reflect our attitudes. If you wish to compare someone to a clown, there’s a difference in calling them a “Bozo” and a “Pennywise,” isn’t there? The Sardanpalus comment was reportedly made after Watts and the journalist left the dressing room that the manager had specially re-decorated for Anna Cora Mowatt at the Olympic Theater. Other accounts consistently say the room was like something out of “1001 Nights.”

The actual décor theme of the dressing room was flowers. Mowatt’s nickname was “Lily.” The rug was moss-green. There were pictures of garden scenes on the walls. Lighting fixtures featured fluted glass that suggested lilies. Theoretically, the reporter could have seen all the artificial greenery, thumped Watts on the arm, and said, “Hey, Farmer Joe, way to bring the outdoors indoors!” That didn’t happen. Instead, something inside the journalist’s head made that individual choose a metaphor that called forth images of a dangerously over-indulgent and ultimately self-destructive ruler presiding over a dominion of decadence that would inevitably bring about the ruin of all under his power.

…Or so we are told by an anonymous narrator with the benefit of forty years of hindsight.

The Watts scandal never metastasized in the U.S. in the same way it did in England. In future entries, I’ll discuss reasons I think this is true. The public relations spin control Mowatt was able to achieve is a major factor – as I discuss at length in my previous book, The Lady Actress. However, there are numerous issues to consider – up to and including the lead up to the start of the American Civil War. I will talk about how the story of the crime was received if we think of Watts as just a generic representative of a type of criminal. Judging from editorial responses, for newspaper readers who had no prior knowledge of him, Watts as a middle-classed embezzler who stole from insurance company in order to live like a millionaire, was profoundly upsetting to a wide range of London readers in 1850.

The Sardanapalus comment, though(in as much as we can take it as being accurate), reveals, I think, that people who knew Watts were uneasy about his behavior even before the fraud was revealed. Several of the newspapers that covered the London theater scene grumbled about the excess of money being lavished on scenic spectacle at the Marylebone and Olympic and Watts’ tactic of signing up all the most desirable performers to contracts in advance causing a scramble among the other managers for players. Although Mowatt praised him as, “One of the most liberal supporters of the Drama, whose desire to elevate and purify it – whose appreciation and patronage of its humblest as well as highest talent – whose liberality and consideration to all with whom the profession connects him – and whose efforts to establish harmony amongst them, while he promotes the interest of all, are beyond eulogium…”3 other accounts ascribe to him a “Jekyll and Hyde” personality.

Byron has Sardanapalus reply to his detractors:

Romantic, yes, but all the characters in the play do meet tragic ends directly because of his actions by the end of Act V.
During his meteoric rise to the top of London’s theatrical world, something in Watts’ personality and behavior seems to have been raising red flags in addition to exciting envy for his lavish lifestyle. Despite his outwardly mild demeanor, did he give subtle signals that he, like Byron and his fictional heroes, was “mad, bad, and dangerous to know”?

Next week, for a change of pace, we will leave scandal aside briefly and get inside Mowatt’s head with a look at what phrenological analysis had to say about her. 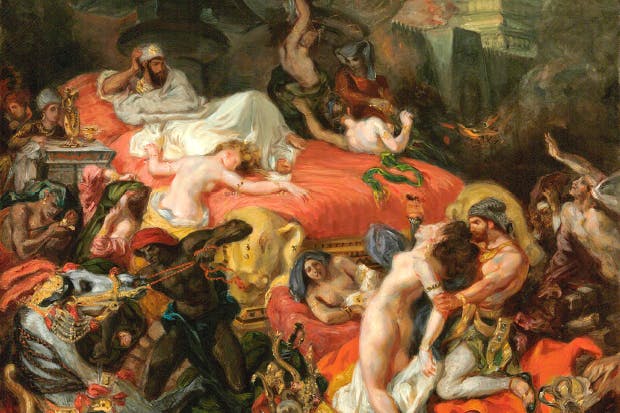 One Reply to “Anna Cora Mowatt and Walter Watts’ Reputation”